Learn more About this website
Reviewed By
Andrew Godwin
Reviewed by Andrew Godwin on Sunday 1st March 2020 at 12:19pm

Learn more About this website
Last Update: on Thursday 29th October 2020 at 8:58pm

Hello again guys, in this article we will take a look at Static Library in C. I will first explain what it is, then we take a look at how to create it and how to consume it. so lets go, shall we? 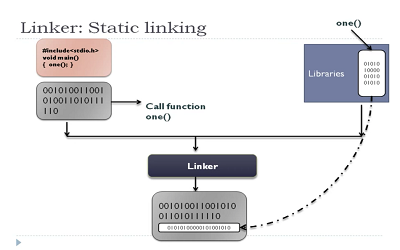 Static library or statically-linked library is a set of routines, external functions and variables which are resolved in a caller at compile-time and copied into a target application by a compiler, linker, or binder, producing an object file and a stand-alone executable. This executable and the process of compiling it are both known as a static build of the program. Historically, libraries could only be static. Static libraries are either merged with other static libraries and object files during building/linking to form a single executable, or they may be loaded at run-time into the address space of the loaded executable at a static memory offset determined at compile-time/link-time.

What is a Static Library

Why use Static Libraries?

Why use static libraries you may wonder, especially when one could just gcc away and run your resulting program straight and away. Afterall, the program would work same way as when using libraries. Well, the reason to use libraries are not much but are definitely advantageous. For me personally, the one of the main reasons is the fact that using libraries make my program portable. With ever changing real world needs, our applications are expected to work every time, everywhere and anywhere. This is where these use of libraries come in; these libraries help your program to do the same thing on every computer. Another reason to use them is because they save considerable development time. They also make your work organized, especially if you have a very large project with lots of files in the working directory. Since they are just like normal archive, they keep your object files neatly packed in an archive and the archive is supplied to the compiler during the linking stage.

A static library is purely a collection of .o files, put together in an archive just like a zip archive but unlike a zip archive, with no compression. It is now ready for linking, the linker during compilation will search the library for .o files that provide any of the missing symbols in the main program, and pull in those .o files for linking, as if they had been included on the command line like .o files in your main program. This process is applied recursively, so if any of the .o files pulled in from the library have unresolved symbols, the library is searched again for other .o files that provide the definitions. Static libraries run at compile time and actually embed inside the code.

How to create a Static Library

Here in the above command , all the .c extension files( C files) in the current working directory have been converted in to their respective object files. Once we have object file(s), we use the GNU ar command to create our final library/archive

The archiver, also known simply as ar, is a Unix utility that maintains groups of files as a single archive file.

This tells ar to create an archive (option c) and to insert the objects, replacing older files where needed (option r). Whenever files are added to a library, including the initial creation of the library , the library needs to be indexed, which is done with the command ranlib. ranlib makes a header in the library with the symbols of the object file contents.This helps the compiler to quickly reference symbols. A large library may have thousands of symbols meaning an index can significantly speed up finding references.

This step may or may not be necessary depending on your computer system or your archiver(not necessary with ar). If we want to see the contents of our library, we can use the ar option -t.

We can also see the symbols in our library, using the command nm, which lists each symbol’s symbol value, symbol type, and symbol name from object files.

How to consume a Static Library

We have now created a static library libholberton.a and now let us use the static library by invoking it as part of the compilation and linking process when creating a program executable. Incase of gcc we use following flags to create static library

Thats all for now folks. Enjoy coding and watch out for my next article.